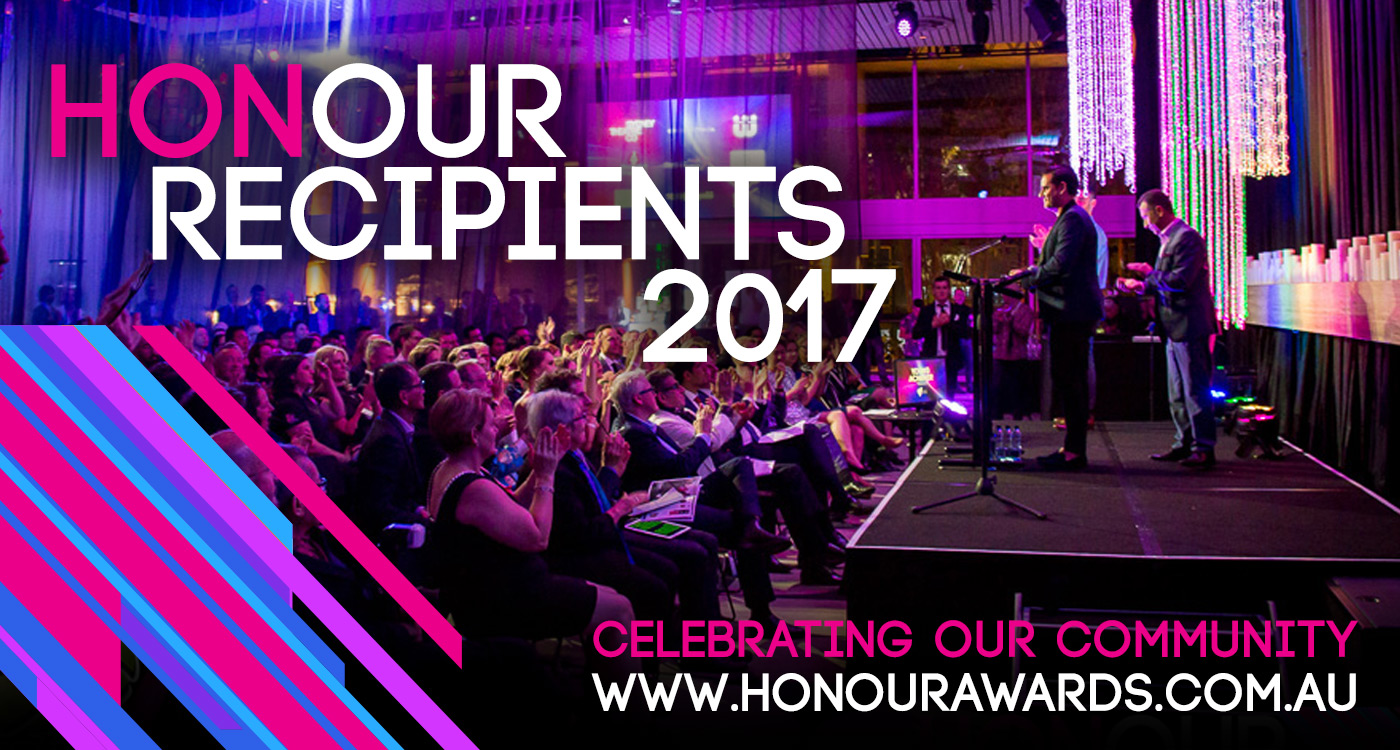 Congratulations to all the 2017 Honour Awards recipients

Community organisations dedicated to supporting the most vulnerable members of the LGBTI community were among a diverse mix of community members and groups honoured for their work in support of LGBTI communities at the Honour Awards in Sydney on 27 September 2017.

Hundreds of people and organisations from across NSW and Australia came together to celebrate the achievements of equality champions and unsung heroes, as well as the strength and resilience of the LGBTI community.

The winners were selected from a diverse field of over 230 nominations and 28 finalists, and their awards were presented at a ceremony at the Ivy Ballroom.

GALLERY: See all the glitz and glamour at the 2017 Honour Awards here

For over two decades, Elaine Czulkowski has worked tirelessly in service of the LGBTI community in NSW. In that time, she has held a variety of roles in a number of NGOs and community groups, including Director at Out for Australia, Board Associate at Queer Screen, volunteer at Bingham Cup Sydney and an ACON Rover. In recent years, Elaine has been heavily involved with Australians for Equality, currently serving as its Fundraising Manager. As an accomplished professional, Elaine has utilised her many years of corporate experience to benefit The Equality Campaign by forging corporate links, educating communities, fostering relationships and strengthening partnerships. A passionate supporter of equality, diversity and inclusion, Elaine has been integral in our community’s ongoing fight for equal marriage rights. In 2017, Elaine was named Local Woman of the Year at the NSW Women of the Year Awards. 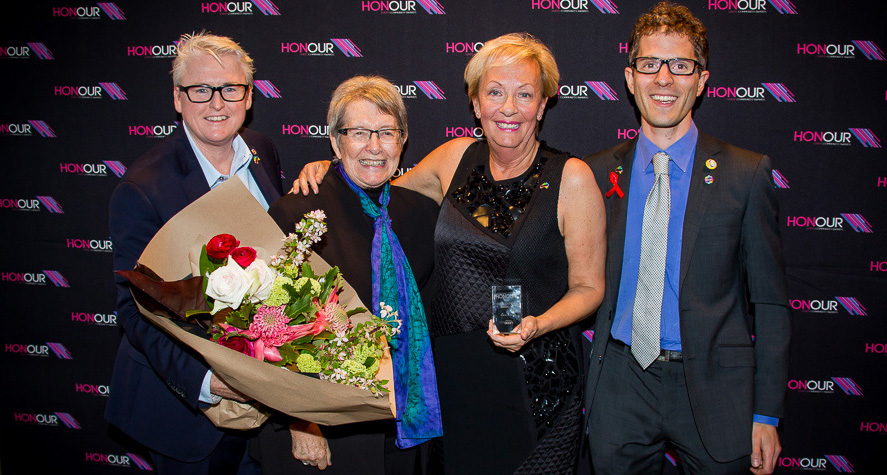 Mikhara Ramsing is a young gay Indian woman whose experiences of being at the intersection of four minority groups has empowered her to connect not just the mainstream, but the margins of Australian society. Mikhara left her secure job as an economist at Deloitte Access Economics with the resolve to increase her impact on the lives of young Australians through her two social enterprises. One of these is Ethnic LGBT+, the first of its kind in Australia, provides a supportive online platform for individuals identifying at the intersection of cultural and linguistic diversity, and sexual and gender diversity. Through Ethnic LGBT+ Mikhara has connected with 200 users monthly to provide resources, education, mentoring and the support to share their stories. 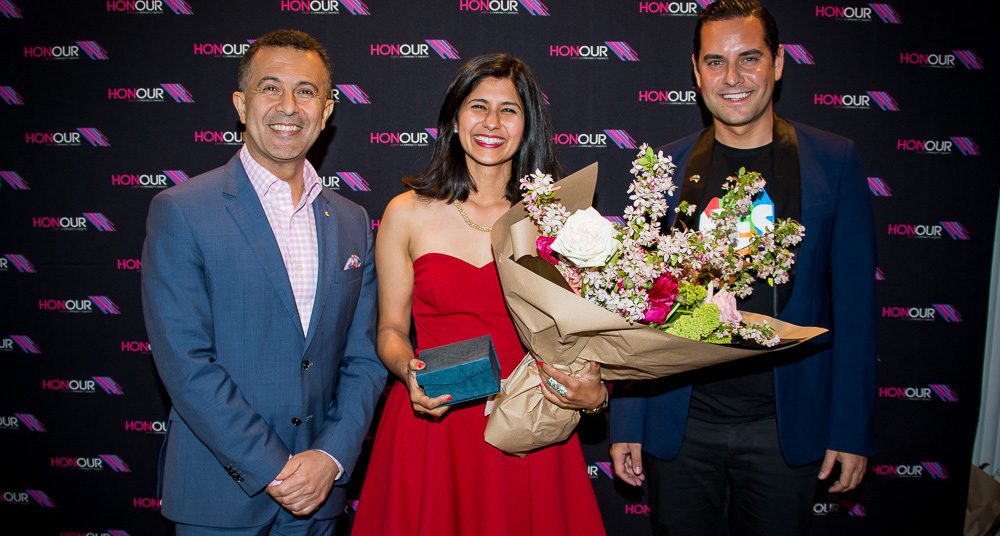 Rainbow Families is a 100% volunteer organisation that provides a network of support to children and families within the NSW LGBTIQ community. Lesbian mums, gay dads, trans parents, adoptive parents, foster parents and all types of rainbow families come together through events, socials and playgroups, parent education sessions and other activities to learn, meet other LGBTIQ families, make new friends and build resilient families. Rainbow Families also works to address discrimination and other social disadvantages faced by LGBTIQ families and to promote acceptance of rainbow families by working with LGBTIQ parents, their children, government, business, schools, the broader community and other not-for-profit organisations. 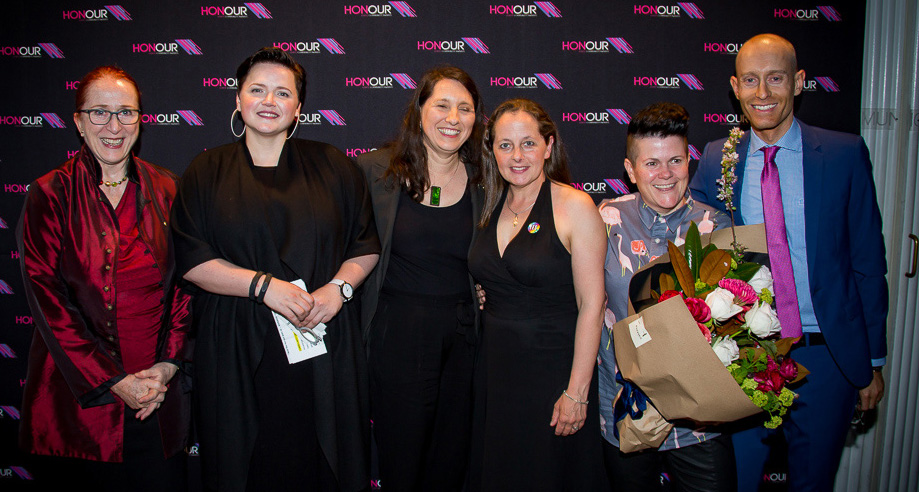 For over 30 years, Twenty10 has provided vital support programs for LGBTI young people and their families, and more recently, mental health services for LGBTI people more broadly following its incorporation of the Gay and Lesbian Counselling Service NSW. Together they provide a broad range of specialised services for people of diverse genders, sexualities and intersex status including housing, mental health, counselling and social support services. Every year, Twenty10 supports hundreds of young people to remain engaged in housing, education, employment, family or community and provided phone or online counselling to over 3000 people. 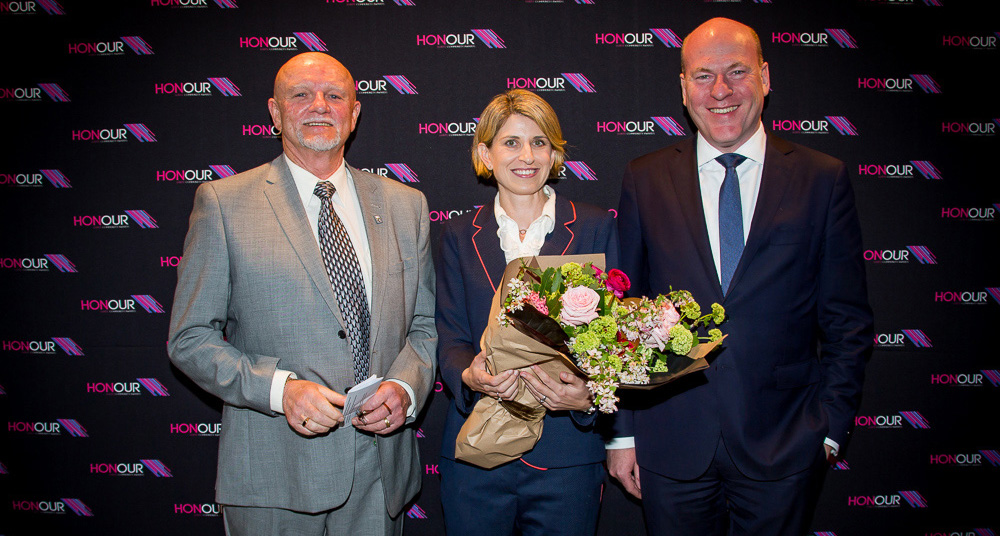 The Red Rattler Theatre was founded as a community initiative in 2008 by five queer women and it continues to be not-for-profit, volunteer-driven and community owned. It is a queer-run creative playground for performers, musicians, artists, designers, multi-media makers, experimentalists, film-makers, theorists, activists, collective organisers and punters. The Rat has been recognised for providing an inclusive and affordable performance and events space for a range of communities, and for supporting established and emerging queer talent through diverse, creative and inspiring programming. 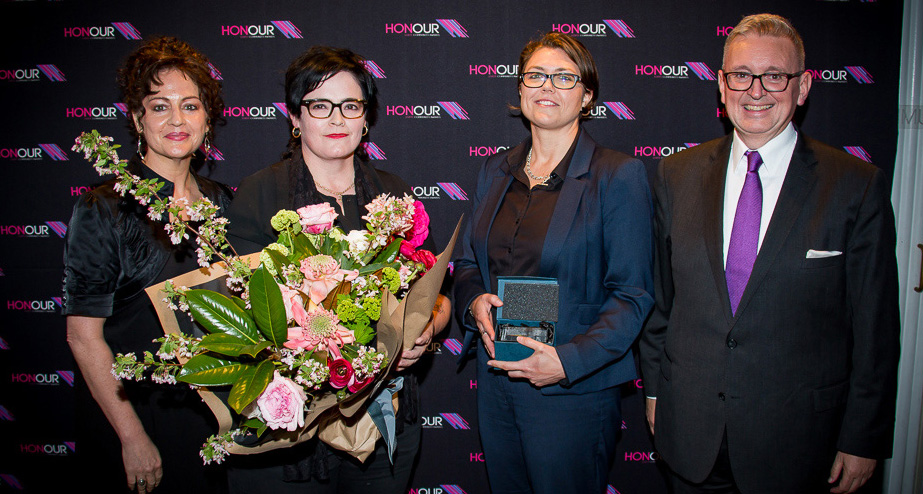 Dowson Turco Lawyers is Australia’s only out loud and proud LGBTI law firm of its kind. With a large team of family, criminal, estate, commercial and property lawyers, the firm acts across the spectrum of law and takes on prominent LGBTI pro bono cases. Outside of the practice, the firm’s lawyers are engaged on boards and committees of various LGBTI not for profit organisations. Dowson Turco is a pillar of the LGBTI community, passionate about the human face of law and a generous benefactor to progressive causes. 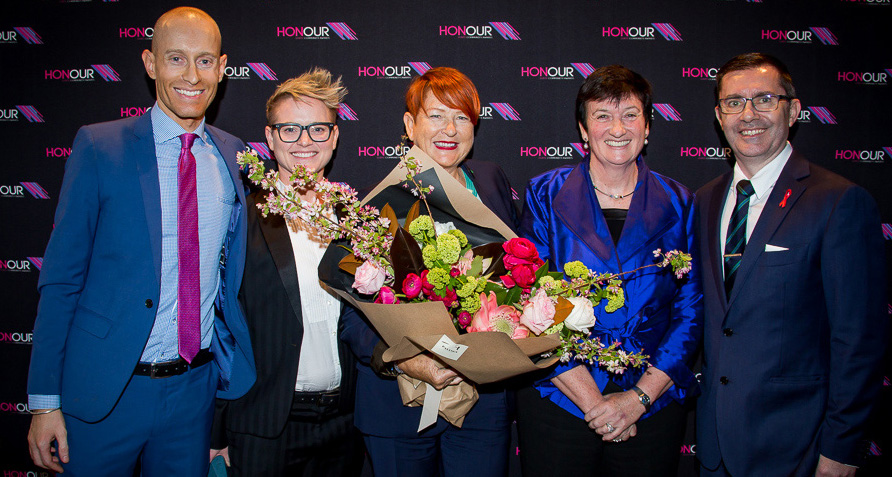 Originally from the UK and now based in Sydney, Guy James Whitworth is a prolific artist whose work focuses on the queer community and identity. He has exhibited several exhibitions that explores gay culture over the years.  The submissions for this award included works from Whitworth’s 2016 exhibition, What Maketh A Man, which explored the concept of masculinity and challenging gender norms and sexual politics. That exhibition builds on a growing body of work, which demonstrates a clear evolution and growth in Whitworth’s philosophy, vision, craft and style. 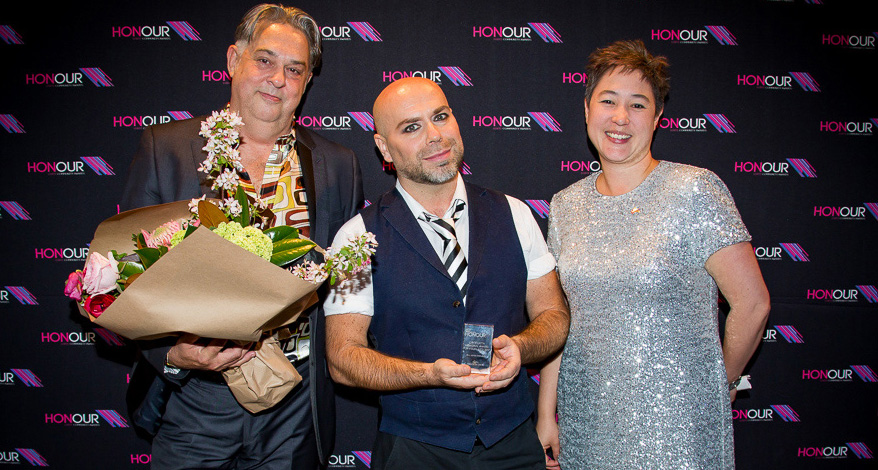 Monique Schafter is a Walkley Award-winning journalist and documentary filmmaker. She has interviewed icons such as Academy Award winner Jodie Foster, Russian feminist punk collective Pussy Riot and rock legend Iggy Pop, and has sought out the voices of young asylum seekers, LGBTQI warriors, indigenous trailblazers, and an assortment of everyday heroes with fascinating stories. Monique received the Honour Award for her powerful profile on Peter ‘Bon’ Bonsall-Boone and his fight to expunge a second historical homosexual conviction dating back to the 1950s, which later helped to clear Bon’s name just days before he passed away in May 2017. The story, which aired on The Link on the ABC, is just one of Monique’s many outstanding reports that brought LGBTI issues to the fore on the national broadcaster.

Serving the people of the Northern Territory for more than 60 years, the NT News allows Territorians to escape the daily grind by being informed and also enjoy the lighter side of life. The NT News has been recognised for actively campaigning the Federal Government to abandon the postal survey and legislate for marriage equality in a full front page – the first major state/territory newspaper to do so. It was seen by an estimated 2 million viewers on social media in 24 hours and became the most retweeted front page in Australia’s history. The print edition, distributed across vast swathes in the Northern Territory and its neighbouring islands, delivered the message of equality to some of the country’s most remote communities. 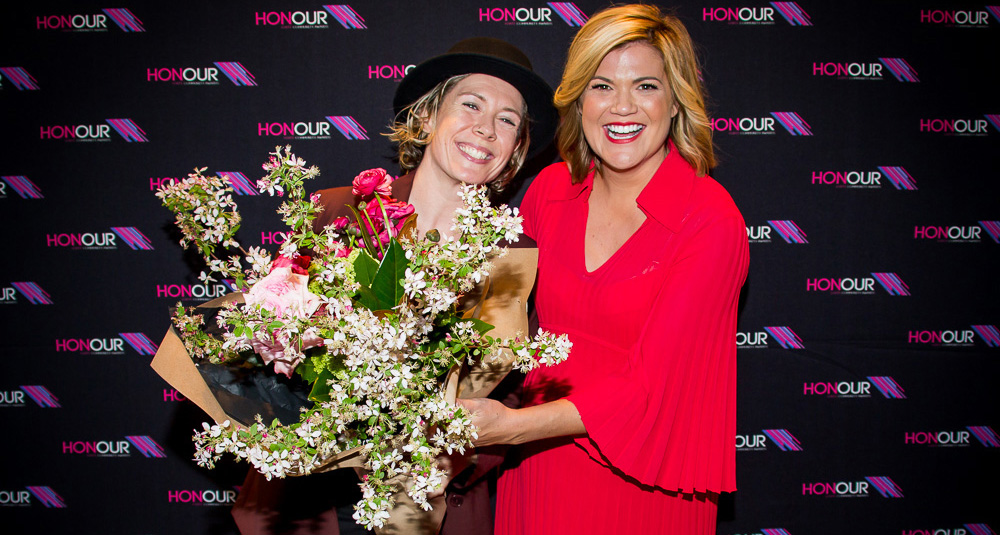 Established in 1986 in response to the emerging HIV/AIDS epidemic, The Kirby Institute’s world-leading research has played an instrumental role in how NSW – and Australia – became renowned for world’s best HIV/AIDS policy and health practice. Later it broadened its work to contribute to knowledge on a broad range of diseases, including viral hepatitis and sexually transmissible infections.

Since its establishment, The Kirby Institute has been led by Professor Cooper who, as director, has overseen and guided crucial research into the HIV/AIDS epidemic, with the ultimate aim of reducing the burden of HIV/AIDS for affected communities. Through Professor Cooper’s leadership, The Kirby Institute has led national epidemiology and surveillance of HIV/AIDS, viral hepatitis and STIs, including the co-ordination and conduct of clinical trials of innovative therapies and vaccines for HIV, as well as other related clinical research.

Professor Cooper is also a consultant physician to the HIV/immunology infectious diseases clinical services unit at St Vincent’s Hospital in Sydney, and is internationally renowned as being a leading HIV clinician and clinical investigator. Throughout his career, Professor Cooper has also been the President of the International AIDS Society and past Chairman of the World Health Organisation-UNAIDS HIV Vaccine Advisory Committee. 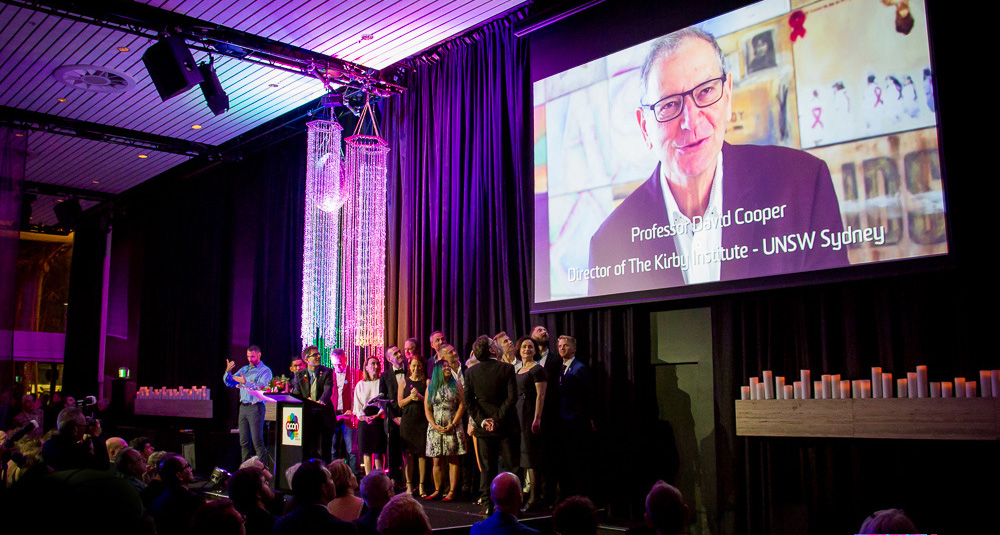 VIDEO: See all the presenters and winners at Honour Awards 2017