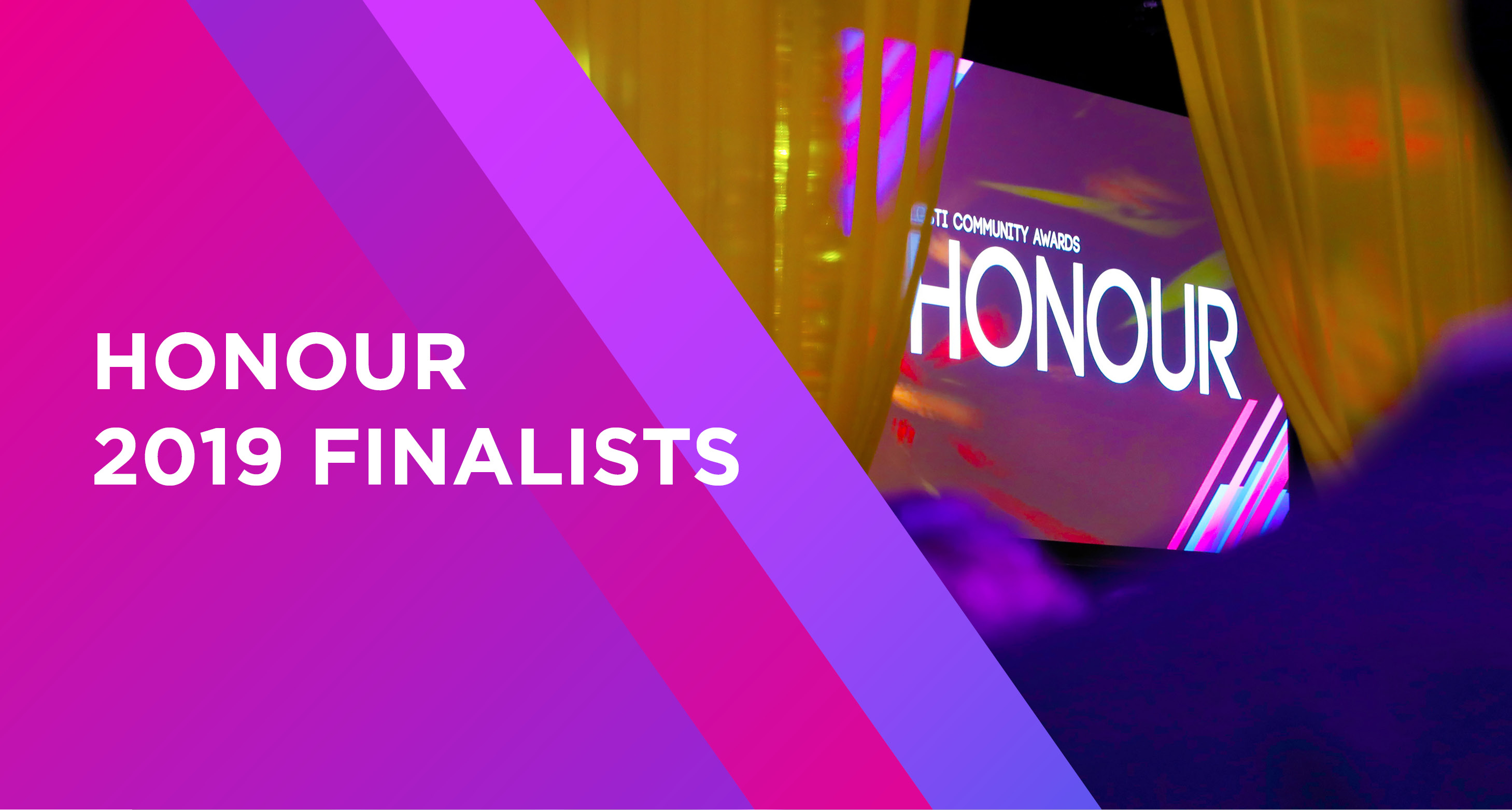 Katherine Wolfgramme: For her work in advocating for the health and wellbeing of trans and gender diverse (TGD) people, as well as greater inclusion of TGD communities in Australia and the Pacific. Katherine is a TGD consultant, educator, writer and presenter, who has been instrumental with raising awareness of Transgender Day of Remembrance in Sydney. She is the Ambassador of The Gender Centre, Associate Board Member of Sydney Gay & Lesbian Mardi Gras, has been involved with Rainbow Families and was a board member and Public Officer of Wear It Purple. In 1997 Katherine won the right to be the first transgender person to legally change their name on all legal documentation including birth certificate in her country of birth Fiji, marking an important milestone for LGBT rights in that nation.

Duncan McGregor: For over 30 years of work in fighting homophobia and discrimination in Australian sport at a grassroots level, as well as the pinnacle of national and international sports administration and governance. Duncan was a co-founder of ‘POOFTA’ (Sydney Proud Out and Open Football Touch Association) in 1988; has been involved with the Sydney Convicts Rugby Club over 15 years; was instrumental in staging the ‘World Cup of Gay Rugby’ – the Bingham Cup – in Sydney in 2014; and played a crucial role in the development of the Australian-first Anti-Homophobia Framework for Australian Sport.

Cristyn Davies: For her tireless work in advocating for the human rights of sexuality and gender diverse Australians with a focus on young people. Cristyn is a senior research fellow in the Discipline of Child and Adolescent Health, Faculty of Medicine and Health at the University of Sydney, and was co-chair of LGBTIQA+ youth organisation, Twenty10 for four years. She was recently an Australian representative at the United Nations Human Rights Council where she worked to successfully to renew the global mandate for protections against violence and discrimination based on sexual orientation and gender identity.

Dylan Lloyd: For his passionate work in supporting LGBTIQ youth, with a particular focus on assisting young homeless community members. Dylan launched the Australian Queer Student Network’s Ending Queer Youth Homelessness project in 2015, which supported educational institutions on a national scale to establish crisis accommodation facilities and enhance their emergency and welfare support systems for both LGBTIQ and non-LGBTIQ students.

Victoria Anthony: For her work in raising the visibility of trans and gender diverse people through her Transglamore cabaret night at the Colombian Hotel. Now in its second year, Transglamore provides a space for people in TGD communities to come together in a safe and supportive environment. Victoria has also become one of LGBTIQ Sydney’s most sought-after performers, entertainers and DJs, appearing in various community events in Sydney and NSW.

Alexander Lamarque: For his efforts in creating welcoming, supportive and inclusive environments for LGBTIQ people through his professional, volunteer and creative arts work. A well-known figure on the Sydney comedy scene as a part of Cleo and the Kweens and the monthly Kweens of Comedy show, Alexander is also the host of the internationally renowned Dungeons & Drag Queens podcast.

Lizzie Griggs: For 34 years as a nurse providing HIV prevention and education, including care and support for people living with HIV. In 1985 as a founding nurse at the Albion Centre in Surry Hills, Lizzie started the World’s first AIDS Outreach Bus Program, an HIV prevention & care service for male & transgender sex workers. Since then, Lizzie has worked in numerous community-based HIV/STI services, including the Kirketon Road Centre, the Medically Supervised Injecting Centre, and was NSW HIV/AIDS Surveillance Officer for the Ministry of Health for 13 years sourcing funding for HIV services in NSW. Lizzie currently works as a Clinical Nurse Specialist at RPA Sexual Health and oversees a[TEST] Newtown.

Sr. Margaret Mines: For her tireless work in supporting and caring for people living with HIV during the peak of the epidemic, from the late 1980s to early 1990s. At a time when very few religious bodies were reaching out to people living with HIV and their loved ones, Sr Margaret offered care and compassion to many patients who would later succumb to the virus. She also played a crucial role in establishing The Tree of Hope drop-in centre in Surry Hills in the mid-1990s.

Sylviane Vincent: For her almost two decades of dedication, passion and commitment to people living with HIV through her work and numerous roles at the Bobby Goldsmith Foundation, including working as a Community Support Worker and later an Alcohol and Other Drugs Senior Caseworker.

Metropolitan Community Church: For over 40 years of providing a welcoming and inclusive environment for LGBTIQ people of Christian backgrounds, as well as their friends, families and allies.

The Pollys Club: For almost six decades of organising iconic events for LGBTIQ people in Sydney, raising thousands of dollars for various community projects, causes and charities throughout the years.

Trikone Australasia: For raising awareness of, and celebrating, queer people from South Asian backgrounds in Australia for over a decade through a series of community activities and social events.

Seb Starcevic: For his diverse portfolio of articles and columns published in a range of mainstream and LGBTI media outlets that puts LGBTIQ issues front and centre. More recently, Seb has worked tirelessly on an investigative series that shines a light on historical hate crimes affecting LGBTIQ communities in Victoria.

Lisa Pellegrino: For over ten years of work in radio and stage, much of it Darwin in the Northern Territory, with a strong focus on LGBTIQ people and stories. Currently with ABC Radio, Lisa continues to create spaces and provides a forum for city, regional, bush and remote LGBTIQ stories and experiences to be heard and shared with local LGBTIQ and wider communities.

Gary Nunn: For his extensive body of work shining a light on a diverse range of LGBTIQ issues in Australian and global media. Gary’s writings in recent months on popular outlets such as the BBC, The Sydney Morning Herald, The Guardian, ABC and 10Daily have helped draw mainstream attention on key issues affecting LGBTIQ communities such as equality, ageing and historical violence.

Gregory Phillips: For 25 years of leadership in Aboriginal and Torres Strait Islander health as an Associate Professor of Aboriginal Health and serving on several boards and committees, including chairing the Cathy Freeman Foundation and Australian Health Practitioner Regulation Agency and the Australian Medical Council’s Indigenous health strategy groups.

Gary Driscoll: For over a decade of striving to improve the culture, understanding and awareness of the LGBTIQ community both within and external to Surf Life Saving Australia, through his involvement with Lifesavers with Pride.

Lisa Rose: For her pivotal role over seven years at Queer Screen, most recently as Festival Director, in ensuring the diversity of LGBTIQ communities are represented on screen at the Mardi Gras Film Festival and the Queer Screen Film Fest.

Mitchell Butel: For his decades-long work as an openly gay actor, singer, writer and director. Over the years, Mitchell has used his profile to advocate for equality, social justice and the wellbeing of people diverse sexualities and genders, and he has helped support and advance the careers of artists and performers, particularly those from the LGBTIQ community.

Dallas Webster: For raising the visibility of Aboriginal and Torres Strait Islander LGBTIQ people through his drag alter-ego, Nova Gina, who was featured in the 2018 NITV documentary Black Divas and the ABC’s You Can’t Ask That.

Jonny Bastin, Bear Bar: For establishing the successful Bear Bar, a space that welcomes all members of the community. A popular destination on Oxford Street, Bear Bar offers a diverse social and community-focused calendar. Through its various event and initiatives, Jonny and Bear Bar has raised funds for local charities and community organisations.

Daniel Berger, Wyd: For launching the online start-up, Wyd, a social app designed to help people get involved and stay connected with their local communities. Wyd features a range of listings and events, including social opportunities for LGBTIQ people.

Thank you for your support! Join us in recognising outstanding achievements and service in our communities. Purchase tickets to the 2019 Honour Awards here