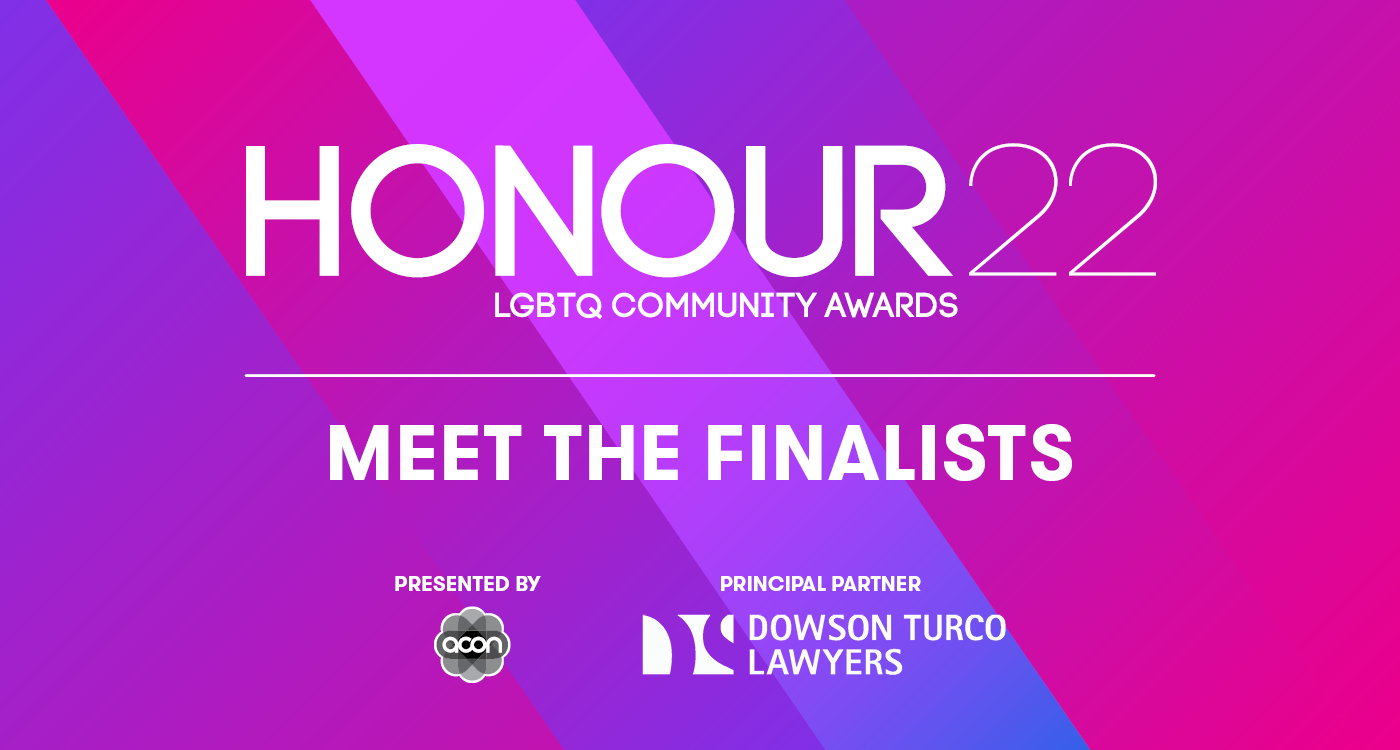 First held in 2007, the Honour Awards celebrates outstanding service to, and achievements within, the LGBTIQ community in NSW. The awards are also a gala fundraising event for ACON, NSW’s leading HIV and LGBTQ health organisation.

The winners will be announced at a gala ceremony and cocktail party at the Ivy Ballroom in Sydney on Wednesday 17 August 2022.

ACON CEO Nicolas Parkhill said the judging panel were impressed not only by the number of nominations, but also by their quality and variety.

“Across NSW are communities of vibrant, passionate, dedicated and hard-working LGBTQ people and allies, and our judging panel had a difficult task of selecting finalists from many worthy submissions.

“But the judges agreed that the finalists they have selected exhibited a truly outstanding commitment to supporting LGBTQ communities and deserved to be recognised for their efforts.”

The Honour Awards returns this year after being cancelled in 2020 and 2021 due to the pandemic.
Over 230 nominations were received in 2022 – a record for the Honour Awards.

“We were overwhelmed by the enthusiastic response to our callout for nominations this year,” Parkhill said.

“It has been wonderful to see so many of you draw attention to the amazing work of people and organisations in our communities. We thank you everyone who submitted a nomination and for being part of the Honour Awards.”

Finalists will join over 300 attendees including a host of media, entertainment, government, and community personalities for a fabulous night of fun and celebration at the Honour Awards ceremony and cocktail celebration, to be hosted by Faustina Agolley.

“We look forward to celebrating the excellence, strength, diversity and resilience of our communities at this year’s Honour Awards,” Parkhill said.

Ann-Marie Calilhanna: For her passionate and dedicated work in documenting Sydney’s vibrant LGBTQ culture over 20 years through photography.

Brodie Gray: For her work in supporting LGBTQ communities in the Illawarra-Shoalhaven and south coast regions of NSW.

Katherine Wolfgramme: For her tireless work as a trans advocate, activist and educator.

Nyx Harris: For their work in advocating for the health and wellbeing of sexuality and gender diverse autistic people.

David Connah: For his impressive work in promoting diversity and fostering LGBTQ inclusion in higher education and corporate Australia.

Isabella Calero-Rivarola: For her work in advocating and supporting LGBTQIA+ youth, as well as LGBTQIA+ people with disability.

The Aurora Group: For its ongoing support for various LGBTIQ+ projects and initiatives through its grants programs.

Coastal Twist Festival: For delivering a vibrant and diverse LGBTIQ arts and culture festival in the NSW’s Central Coast.

Yesim Karasu: For their passion, commitment and hard work in helping to improve the health and wellbeing of sexuality and gender diverse people.

Brahm Marjadi: For his work in LGBTQIA+ health advocacy and inclusion in the Western Sydney region, nationally and internationally.

Loretta Healey: For 25 years of service in sexual health.

Steve Spencer: For his tireless work in HIV advocacy as well as raising awareness of the health needs of bi+ Australians.

Ruan Uys: For his efforts to deliver programs and activities at the Bobby Goldsmith Foundation that connects people living with HIV.

Julie Bates & Basil Donovan: For their tireless work to improving the health and wellbeing of people living with HIV over the past 40 years.

Joanne Holahan: For 35 years of service as a nurse, starting at St Vincent’s in 1987 at the height of the AIDS crisis.

Andrew Buchanan: For a decade of outstanding service at the Bobby Goldsmith Foundation.

Fruit Box Theatre: For supporting queer artists and performers through its activities and programs.

Glitta Supernova: For over two decades work as an artist, performer, producer and culture-maker.

Dyan Tai: For his accomplishments as a performer, musician, artist and DJ.

Laura Hart: For her role in nurturing and supporting drag king culture in Sydney.

Courtney Act: For their extensive body of media work, particularly in television, and for supporting LGBTQ causes, charities and communities.

Jason Om: For his work as a broadcast journalist, author and speaker in elevating under-represented voices in the media.

Roz Bellamy: For their work as editor-in-chief of Archer Magazine, including – notably – Archer’s Disabilities issue published in December 2021.

Gary Nunn: For his diverse portfolio of articles published in Australian and global media that shines a light on LGBTQ issues.

Hank Paul: For his inclusion training programs for business owners and service providers in the wedding industry.

Luke Stambouliah: An international portrait photographer who has exhibited widely and is known for shooting editorial portraits and publicity stills for Australia’s leading actors, artists and productions.

Samuel Luke: A trans artist who uses his authentic experiences as a vehicle to explore intimate and complex realities of the lived trans experience.